We Fact-Checked Seven Seasons Of Shark Tank Deals. Here Are The Results. – Forbes

Emily Canal ,  FORBES STAFF I manage the homepage and cover the day’s news

The hit ABC show that gives entrepreneurs a chance to pitch celebrity investors depicts some business owners walking away with life-changing deals. But more often than not, those hand-shake agreements change or fall apart after taping.

FORBES found that 319 businesses accepted deals on-air in the first seven seasons of Shark Tank. We spoke to 237 of those business owners and discovered 73% did not get the exact deal they made on TV. But tweaked terms or dead deals don’t necessarily spell doom for a business; for many contestants we spoke to, the publicity of appearing on the show ended up being worth more than the deal. 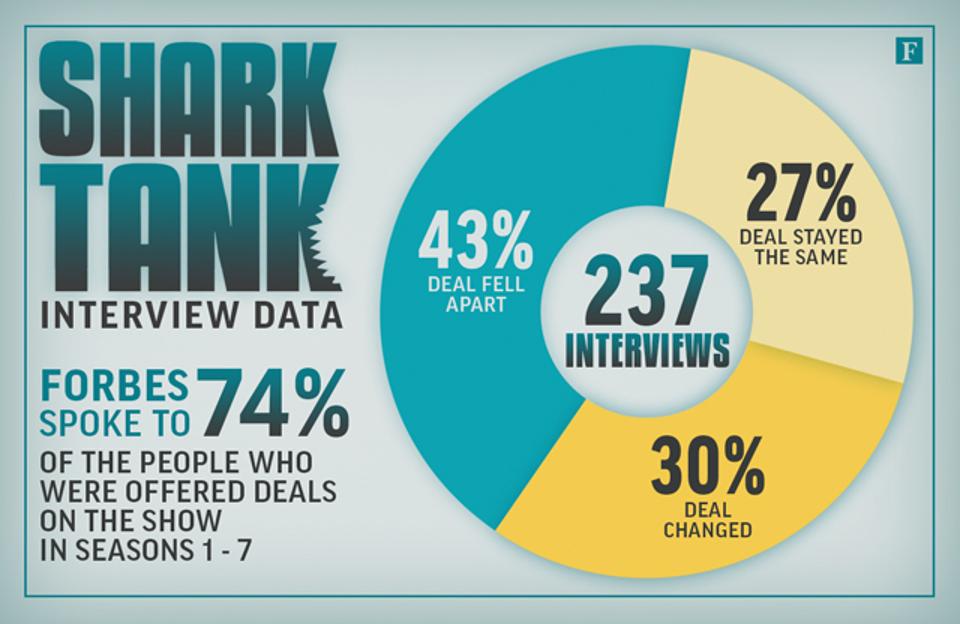 About 43% of the people we spoke with said their deals didn’t come to fruition after the show. They attributed this to sharks pulling out of the agreement or changing the terms to ones that didn’t work for them. Others canceled deals after getting term sheets that included unappealing clauses. And occasionally the deals ended amicably.

Mark Cuban Is King Of Sealing Deals Made On ‘Shark Tank’

Another 30% of the people FORBES interviewed said the equity and investment amount offered on-air changed after taping — but they chose to take the deal anyway. They said that the changes often occur during negotiations or in due diligence, an investigation into a person or business before signing a contract.

Although our analysis was not exhaustive (FORBES was able to interview 74% of contestants who got deals on camera), the numbers suggest that some investors are less likely to change their deals after the cameras stop rolling. Mark Cuban, who by our count closes more deals than any other shark, changed the agreements he made on-air change only 25% of the time. 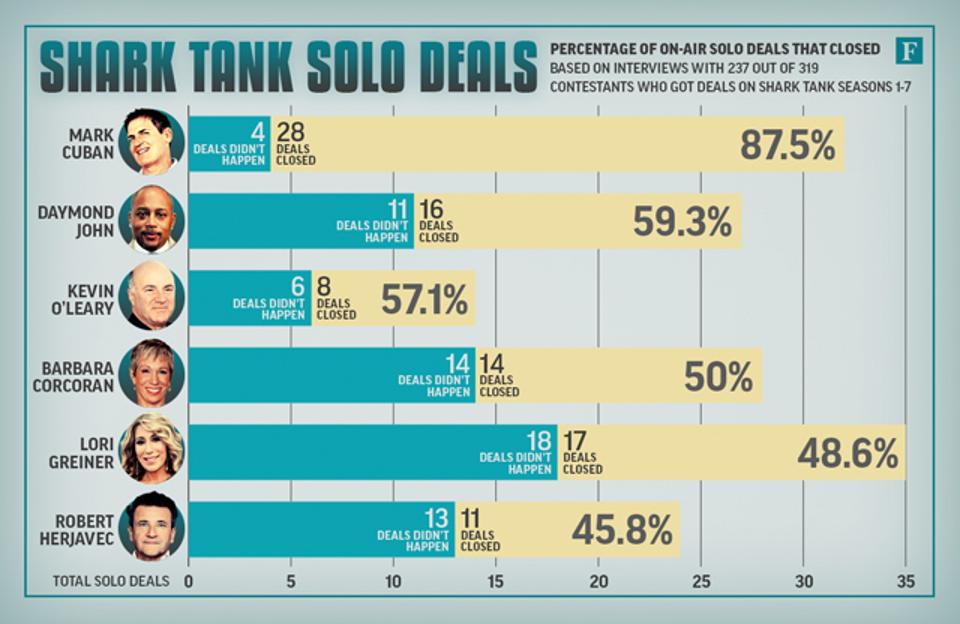 ABC is transparent about the due diligence process and isn’t accountable for how deals pan out during negotiations. ABC did not return requests for comment by time of publishing.

We contacted as many of the 319 businesses as possible, but some refused to share how and if their deals evolved, and others simply did not respond. While the results aren’t comprehensive, this is the most complete record of how often deals change after taping and why that occurs.

The goal of entrepreneurs going on Shark Tank is to make a deal and see it close. But if it falls apart, it’s not always a tragedy. About 87% of the businesses we spoke to that didn’t get deals are still operating. The remainder have shuttered, were acquired or sold. 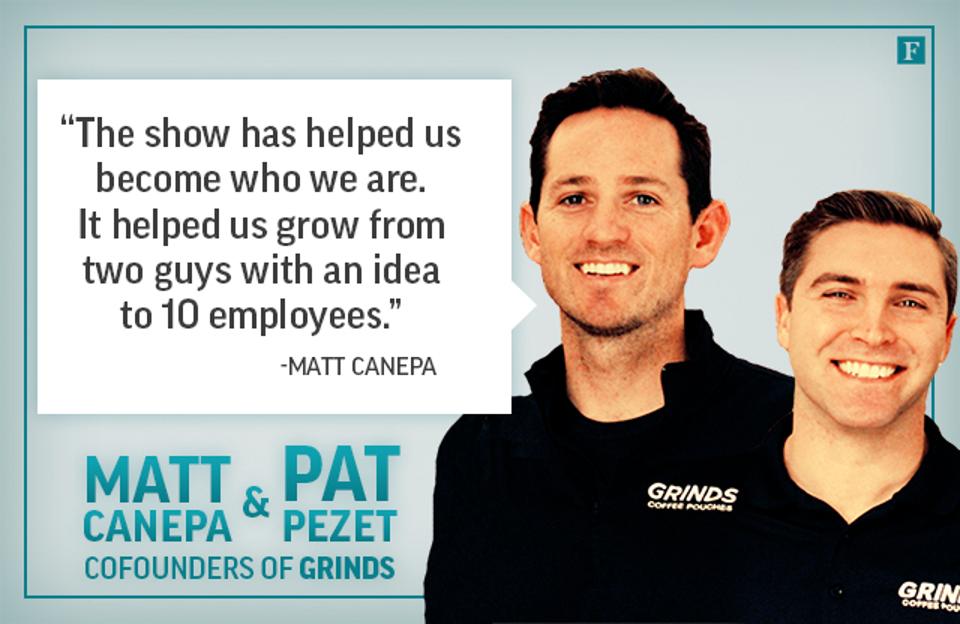 Matt Canepa and Pat Pezet appeared on season four of Shark Tank to pitch their company Grinds, which sells chewable coffee pouches. They agreed to give Daymond John and Robert Herjavec 15% equity for $75,000. However, the deal died in negotiations.

“Pat and I went on the show 100% wanting to get a deal,” Canepa said. “Regardless of whether or not you get the deal, there are a lot of success stories.” 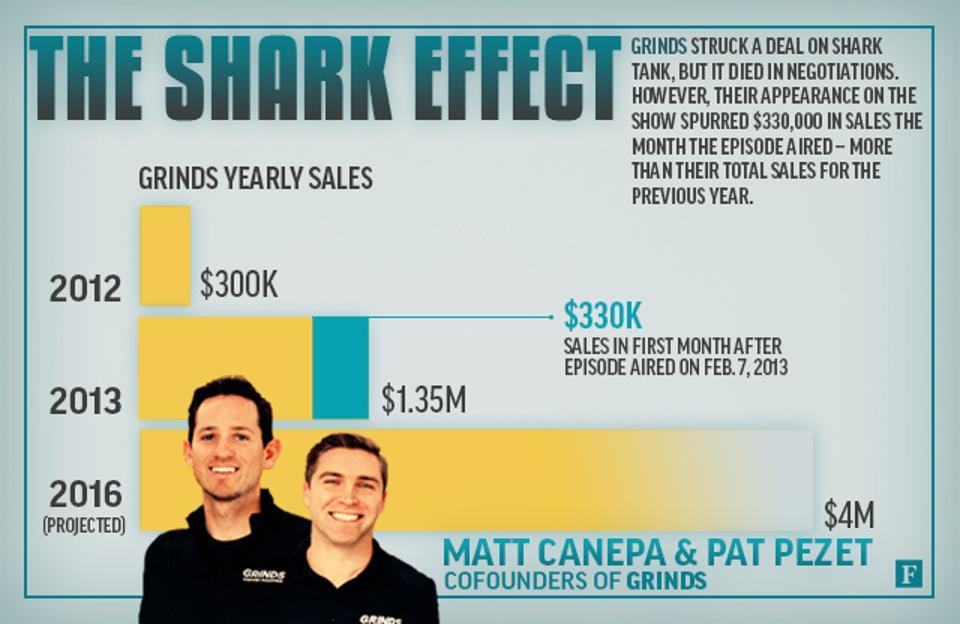 Grinds brought in $1.35 million the year their episode aired, and have watched that number rise. This year, they are expecting to do over $4 million.

Grinds isn’t alone. Nicholas and Alessia Galekovic, cofounders of the grooming accessories company Beard King, made an agreement with Lori Greiner during season seven last year. But around the time they filmed their episode, business took off, and the deal no longer met the needs of the company. 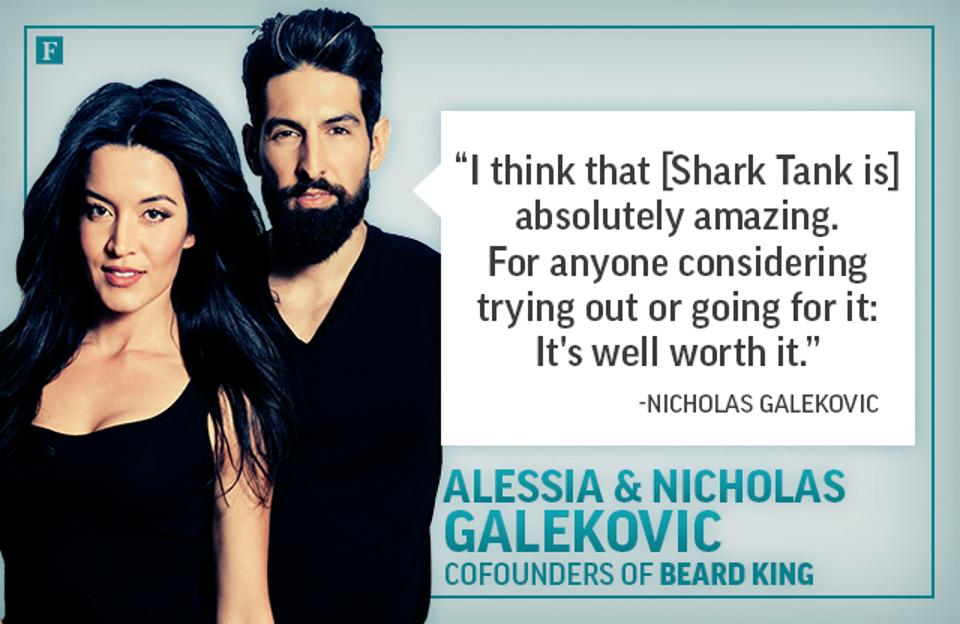 The agreement broke down in negotiations. But in the year after the episode aired, the company did around $700,000 in sales. This year, they are expecting over $1.6 million.

“I think that [Shark Tank is] absolutely amazing,” Nicholas said. “For anyone considering trying out or going for it: It’s well worth it.”

Editor’s note: This post was updated on Nov. 2 to reflect additional reporting.

This site uses Akismet to reduce spam. Learn how your comment data is processed.